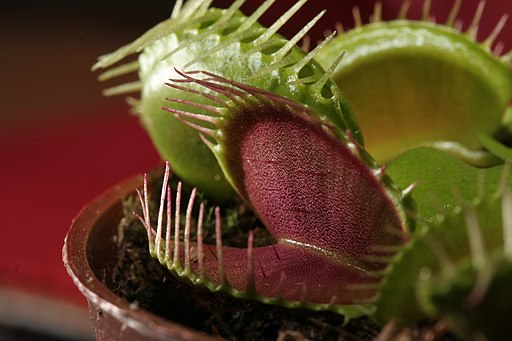 The Venus flytrap, sometimes called Venus’s flytrap or Venus’ flytrap, is the common name of a plant known as Dionaea muscipula. The Venus Flytrap (VFT) is one of the most unusual plants in that it is a carnivorous plant. In other words, it derives some or most of its nutrients from trapping and consuming small animals, typically insects or spiders. It also gets its nutrients from methods that other plants do, such as sugar by photosynthesis. Carnivorous plants live all over the world but the Venus Flytrap is native to select boggy areas in North and South Carolina.

The VT has a series of leaves, called traps, that resemble mouths. Tese are open wide and contain a series of the trigger “hairs”. If one of these is brushed/moved and another with a short period of time, the trap closes quickly, trapping whatever triggered the trap off in the first place within in less than a second. If what sets off the trap is not considered food, such as a small stone or nut, the trap opens up again in around 12 hours.

Once a viable meal has been caught, the VFT shut tightly and form an air-tight seal in order to keep the digestive fluids inside and bacteria out. The trap constricts tightly around the insect and secretes digestive juices, in much the same way as an animals digestive system. The process of digestion takes around 5 to 12 days, then the digestive juices are reabsorbed and anything that could not be consumed, such as an endoskeleton, are washed or blown away.

The VFT, under ideal growth conditions it will reach a maximum size of about 13 cm, or 5 inches, in diameter for the entire plant, with a single leaf trap being around 3cm or 1 inch, in length. They have proven to be popular houseplants for any people, as the obvious advantage to dealing with flys and insects is readily apparent.

[World Anvil] The Giants of Easthalen

This website uses cookies to improve your experience while you navigate through the website. Out of these, the cookies that are categorized as necessary are stored on your browser as they are essential for the working of basic functionalities of the website. We also use third-party cookies that help us analyze and understand how you use this website. These cookies will be stored in your browser only with your consent. You also have the option to opt-out of these cookies. But opting out of some of these cookies may affect your browsing experience.
Necessary Always Enabled
Necessary cookies are absolutely essential for the website to function properly. This category only includes cookies that ensures basic functionalities and security features of the website. These cookies do not store any personal information.
Non-necessary
Any cookies that may not be particularly necessary for the website to function and is used specifically to collect user personal data via analytics, ads, other embedded contents are termed as non-necessary cookies. It is mandatory to procure user consent prior to running these cookies on your website.
SAVE & ACCEPT
%d bloggers like this: