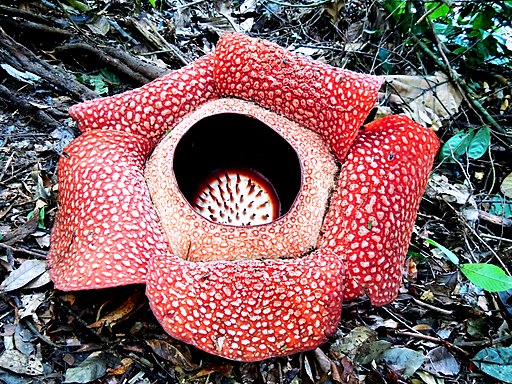 In 1797, French explorer Louis Auguste Deschamps was a member of a French scientific expedition to Asia and the Pacific. Whilst in Java, he discovered a very large flowering plant.
Through a series of events, his notes and materials got captured and moved till they wound up, many years later, into the hands of Robert Brown. Brown proposed the name Rafflesia, after the adventurer and founder of the British colony of Singapore, Sir Stamford Raffles.

This plant has a large flower that is almost 1 meter/3 feet wide. It grows from what resembles a maroon, cabbage-like bud that is approximately 30 cm wide. The “Stinking Corpse” part of Rafflesia common name comes from the fragrance of the flower, which is said to resemble that of a decaying corpse or rotten meat.In many ways, the Rafflesia is a parasitic plant, more like a fungus. It has no root or stem and grows inside its host, a Tetrasigma vine, which is of the grape family. It is believed that the plant uses it corpse-like stench to attract flies and insects to feed on and help it pollenate. The bowl-like centre, from which the stench is apparently strongest, is large enough to contain a cat.

The flower itself , lasts only for a few days, with the longest known to be 7 days. This had made studying of the plant in its natural habitat quite hard over the years since its discovery, with many contradictory reports of its growing season, from summer time, to only in certain months or during the rainy season.